skip to main | skip to sidebar

After all the things that had happened to me throughout the two years of journey in finding my Mrs. Finally, I believe and I really want to believe that you are my soul mate, my perfect soul mate who brings the very best out of me. It had come to a point in my life where I couldn't imagine to go through my life in the future without you. Therefore, let us pray to The One, The Almighty to make it happen, the sooner the better and I want you to know that I will be yours, and hoping that you will be mine, so that, together we will be 1Malaysia, ooops, 1 LOVE. :o)
Hasil karya Ameirul Azraie Bin Mustadza at 7:00 PM 0 comments

This is a love note that shall put you on sleep.

"Don't go anywhere without me. Let nothing happen in the sky apart from me, or on the ground, in this world or that world, without my being in its happening. Vision, see nothing I don't see. Language, say nothing. The way the night knows itself with the moon, be that with me. Be the rose nearest to the thorn that I am. I want to feel myself in you when you taste food, in the arc of your mallet when you work, when you visit friends, when you go up on the roof by yourself at night. There's nothing worse than to walk out along the street without you. I don't know where I'm going. You're the road, and the knower of roads, more than maps, more than love."

These few days have been very hectic and busy for me. I'm really sorry that you don't get the attention you always get. The project is making me crazy. But, hang in there, be patience. Just another two days and everything gonna be back to normal. I heart you, with all my heart. Sleep tight and sweet dreams my beautiful angel of love.
Hasil karya Ameirul Azraie Bin Mustadza at 1:22 AM 2 comments

I recite a prayer "Oh Lord, I seek your help to make everything easy for me, for another two days until the final presentation is over." 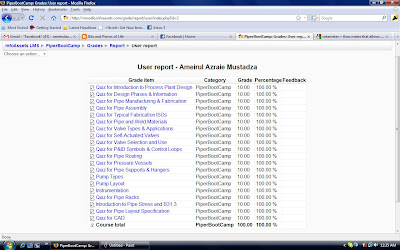 In The Name Of Allah, The Most Beneficent, The Most Merciful; I feel so blessed that Allah send me an angel like you. A beautiful angel with a good heart that always be by my side. I really appreciate your support and I definitely will give the same support when you need it. Thank you for tonight, for helping me with all those quizzes. I love you with all my heart, my soul & my life. Good night my dear.
Hasil karya Ameirul Azraie Bin Mustadza at 7:56 PM 0 comments

With her help last night I've done 6 and all are correct.

Another 14 to be done within this week.

Aku: Sayang, I thank God for today. And I also thank you for bring the happiness back in my life.

Last year’s notice by the International Coordinating Committee of National Human Rights Institutions (ICC) to Suhakam over its failure to comply with the Paris Principles (which set international standards for independent national human rights institutions) and the threat of a possible “downgrading” in its rating bring various concerns into focus.
--
If downgraded, Suhakam will, among other things, lose its right to speak at the United Nations Human Rights Council.
--
Suhakam needs to be bold. Its commissioners can no longer be civil servants but must function as the voice for those whose voices cannot be heard.

But the government has consistently refused to adopt the recommendations. Thus, while more abuses and violations have come to the fore through Suhakam’s reports, the authorities have not been active in solving the problems.
--
Inquiries are often done selectively and there are times when Suhakam adopts a defensive role. It also behaves like a civil service and can be bureaucratic when it comes to registering complaints.”
--
The commission needs to be bolder, considering how the government has chosen to ignore it from the start.
--
Most agree that the federal government’s failure to debate the commission’s annual reports in Parliament shows a lack of genuine respect for the commission.

How Suhakam can be bold when they still have civil servants mentality and when 1Malaysia government choose just to ignore them?

From the beginning of my life
I have been looking for your face
but today I have seen it.

Today I have seen
the charm, the beauty,
the unfathomable grace
of the face
that I was looking for.

Today I have found you
and those that laughed
and scorned me yesterday
are sorry that they were not looking
as I did.

I am bewildered by the magnificence
of your beauty
and wish to see you with a hundred eyes.

My heart has burned with passion
and has searched forever
for this wondrous beauty
that I now behold.

I am ashamed
to call this love human
and afraid of God
to call it divine.

Your fragrant breath
like the morning breeze
has come to the stillness of the garden
You have breathed new life into me
I have become your sunshine
and also your shadow.

Your effulgence
has lit a fire in my heart
and you have made radiant
for me
the earth and sky.

My arrow of love
has arrived at the target
I am in the house of mercy
and my heart
is a place of prayer.
Hasil karya Ameirul Azraie Bin Mustadza at 7:43 AM 1 comments

Direction:
From MRR2, take Exit 'Taman Melawati' (opposite Giant Hypermarket). Go straight pass schools, until you reach Bulatan Hillside. Just before Bulatan Hillside, there is a row of semi-D houses on your right. Awan's place is house no. 4. If terlepas, make a U turn at the Bulatan.

Note:
It is very much appreciated if each of you could bring a dish to this event. E.g Roti John, Murtabak, any type of kuih-muih, where you can get from Bazaar Melawati on the way to Awan’s house.

Ameirul Azraie is ke to the ray to the zeeee!

Ameirul Azraie
"This is what happen when people don't logout their Facebook account on their girlfriend's phone."
Hasil karya Ameirul Azraie Bin Mustadza at 11:01 PM 0 comments 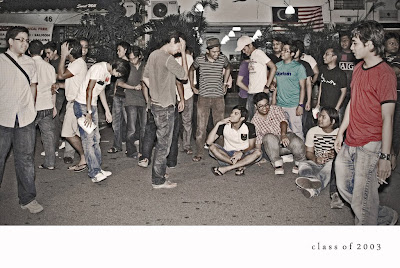 My brothers, my siblings, my family.

Together we are, for a wonderful journey in the future, cheers!
Hasil karya Ameirul Azraie Bin Mustadza at 10:49 PM 0 comments

Why you need to re-arrange my stuff when I already arranged it nicely in my room?!

Zaid Ibrahim: Hi Ms. Grace. I hope you're still as energetic and fierce as always.

Lullaby for my beautiful angel.

I wanna dream away with you tonight.
We can go anywhere you would like.
I wanna feel how I wanna feel forever.

Lullaby for my sweet angel.

"Hush my love now don't you cry. Everything will be all right. Close your eyes and drift in dream. Rest in peaceful sleep."
Hasil karya Ameirul Azraie Bin Mustadza at 1:31 AM 0 comments